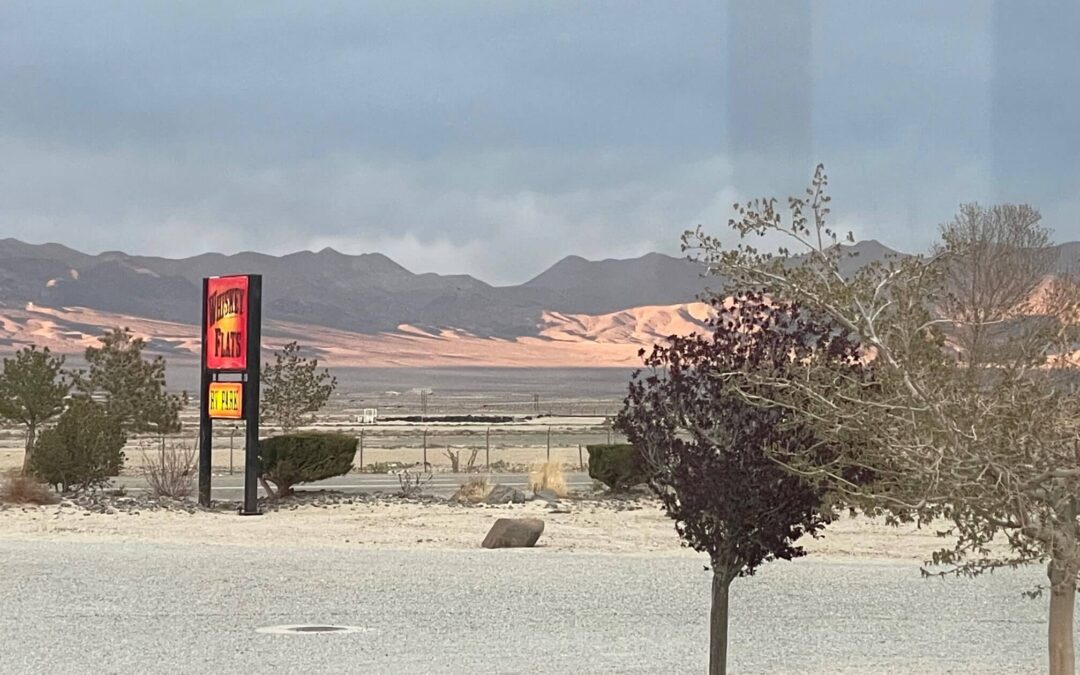 Today, we made it an entire 104 miles from Tonopah. High winds and wind gusts have shut down the rest of the road to our next planned stop – Carson City.

As we drove into Hawthorne, we spent the last 29 miles in a sand storm.  We were trailing another RV and I noticed it was fish tailing a little.

Steve fired back “So are we, look in your mirror!”. 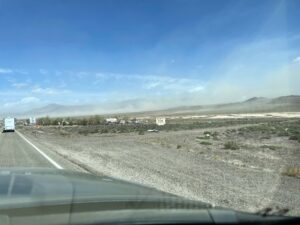 Sure enough, Steve was working hard to keep us upright on the road and in the middle of the lane.  His hands were sweating so badly, that between sand gusts, we amped up the a/c so he could dry and cool his hands, and pause from the swearing.  Then the a/c went off again a lessons learned last year in a previous sand storm to save the air filters.  A very expensive lessons learned.  At least today, there was visitiblity and we could actually see the RV in front of us and beyond.

The part that upset Steve the most, was that we had just splurged for a professional RV wash in Las Vegas.  They scrubbed the RV and hand shined every window and crevice.  When we pulled out of Vegas we looked like a Million Bucks.  Rig still looks good.

Right before the detour, complete with flashing police lights, I had spotted a large RV park.  After being turned around, we went straight to said RV park and snagged the last available spot with hookups.

This is our first time being stranded due to weather.  In one way, it’s exciting.  In another, a total bummer, as it takes a day off our Lake Tahoe visit, which was already a short 4 days.

While setting up camp, the wind was so strong that Steve and I had a hard time hearing each other over the walkie-talkies.  I literally felt the wind try to pick me up off the ground.  That’s some serious wind!

While I did my part for setting up, I started freaking out over the sheer noise hitting the driver’s side of the trailer, especially with our slide covers whipping in the wind.  After a quick vacuum, I pulled both driver’s side slides back in.  I could still feel the wind pressing up against the sides and the trailer started rocking.

We all came inside and had our lunches in the enclosed trailer, with the wind all around us.

Oh! the joys of exploring someplace new and various climates. 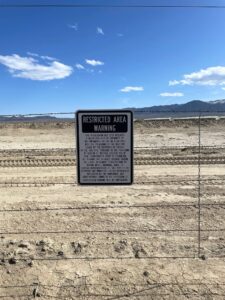 One interesting point of note, this town is home to a NAVSEA location.  As evidenced by the signs on all the roadway fences “Restricted Area – Warfare Zone”.  The signs themselves aren’t creepy.  Coupled with the thousands of bunkers peeking out of the ground from behind those signs is!  Miles and miles of those bunkers.  Apparently warehouses for missiles.  Not entirely sure if that’s supposed to make me feel safer or not.

It has been 102 days since we hit the open road.  And it has been over 15 years since I’ve kept any kind of journal.  Routine daily tasks haven’t been my biggest strength, but since we hit the road – the need for some kind of normal routine has been carrying me through.

My first confession about this new lifestyle is that it is SCARY AS SHIT!  It’s not the road life, or the downsizing, or even being so far from family and friends that has me up at nights practicing my old meditation and breathing exercises.  Nope, it’s something far more primitive.  Money.

Getting us started in this new lifestyle ate up all of our savings.  That and an old tax bill that came due at $2k/month.  We are out here on the open road with no savings at all to fall back on (for the moment).  No safety net – and no forseeable way to rebuild it – at least not this year anyway.  The best I can do is keep the purse strings tight.  Fortunately, I have the kind of job that I can do from anywhere and it does pay the bills and staff.  It also allows me the freedom to have a very flexible schedule – except for Mondays.  Life stops on Mondays.

There have been alot of Mondays where we had to get creative with my work situation.  On one cruise vacation, we experienced terrible internet.  We skipped an excursion day and found the first bar ashore.  We sat there for 4 hours – me pounding the keyboard and Steve making friends with the barkeep.  On my next cruise, I got smarter, and did my Monday work at 3am when the rest of the passengers were asleep.  That’s when the ship’s WIFI was blazing fast!

On another trip, we were training through Europe.  I had the foresight to upgrade our tickets to the first class coach, just for the better WIFI.  I took my time that day with my Monday work, distracted by the rolling French countryside in the large windows.

My Monday work last week may be the most unforgettable adventure yet – as for Steve it was an Adventure! 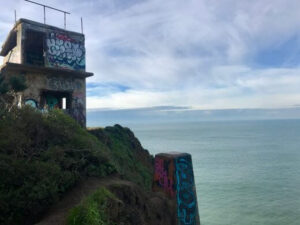 Steve is terrified of heights.  Not just a small fear but a huge terrify.  The first time I experienced this, we were exploring San Francisco ahead of my 20th High School reunion  (Go Hornets!)  We happened to be exploring the old army forts in the Marin Headlands.  My #1 favorite place on EARTY!  We were climbing up a bombed out staircase in the old army bunkers when he suddenly stopped moving.  He was visibly shaking and starting to fall to the ground – apparently to hold on to something stable.

As I looked over his shoulder, it became apparent that the rest of the staircase too, had been bombed out and all that was left was the handrail going up and and empty craven going down in to a canyon.  Hundreds of feet straight down.

So, when our RV park was at the top of a mountain – Steve was predictably not a fan of driving those steep, winding roads.  It would have been a blast for me to drive them as I’m a thrill seeker, recovered adrenaline junkie.  Except Steve absolutely Refuses (capital R emphasized) to allow, err, permit me to drive the truck – much less tow our rig.  Not even to practice.

Driving this mountain became his chore and opportunity to expand his comfort zone.  Again, an area of life we disagree on.  He loves to live nice and cozy in his Comfort Zone, and I enjoy grasping opportunities to move the walls on mine out.  He got us up that mountain with a heavy dose of swearing and sweating.  Only to discover that once we got to our site at the top – there were no cell phone signals – at least not on AT&T.  Which under most circumstances, is a nice reprieve from modern  life, except for Mondays.

After much soul searching, Steve approached me early Monday morning, over coffee, and offered to drive me down the hill so I could work.  I was beaming with pride and excitement.  One, for whatever resolutions he had to come to on his own to face his own fear.  And the latter so I can keep my clients happy!

He packed us up and dropped me off at the closest library, where once again I sat quietly eagerly pounding at my keyboard.

Later that week, he practiced up and down that mountain a couple more times.  That by the time we came down with the rig, there was minimal swerving and far less sweating.  Dare I say, I think his Comfort Zone has been budged out just a little!?!