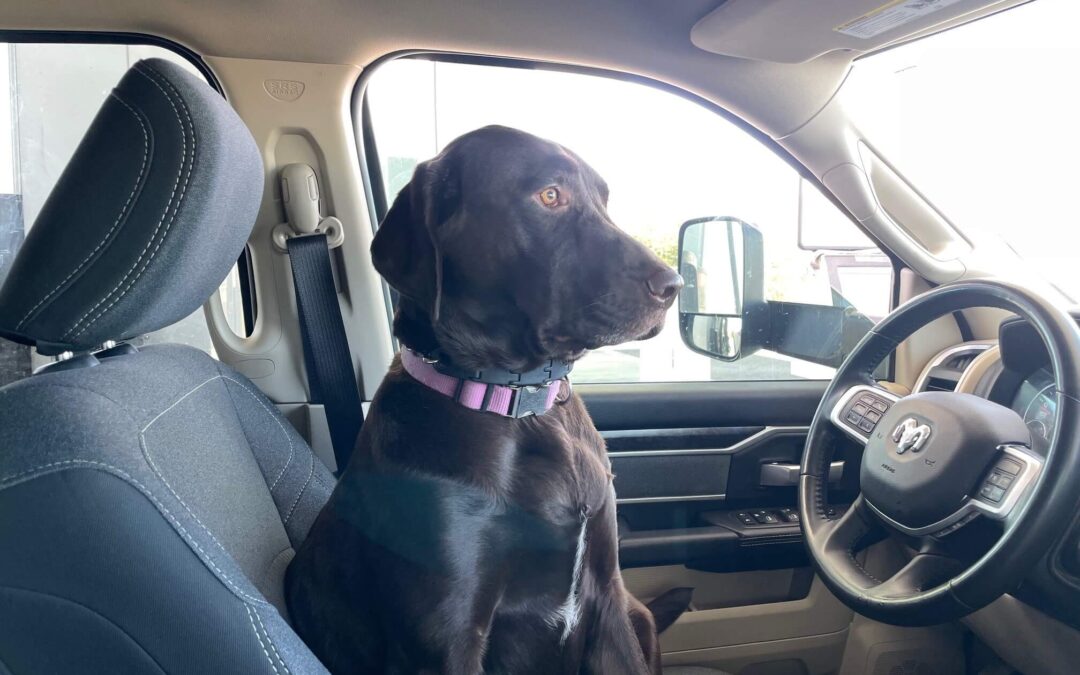 Siri, Which Way to the Dog Park?

The dogs had a field day yesterday – both literally and figuratively. Their adventure started out at the dog park. They both got a good run in, and so did I as we played our favorite game “Chase me if you can”. It’s a game they both love that’s sure to get them running and worn out faster. Fortunately, both dogs love to run, but just for a short bit. They soon give up and fall into ground sniffing and territory marking. Or as Tara used to say “checking the bulletin board”.

The romp around the park left them both sufficiently worn out to endure the 1 hour car ride to Aunt Lee’s house.  They were to be her special guests of the day.  Being that this would only be the second stranger’s house that they’d been in, we weren’t sure how they’d behave.  Fortunately, they did quite well, after they settled down of course.  As Aunt Lee predicted, they were a riot in the beginning, barking at everyone and darting about the house.  Aunt Lee is a kind and patient lady as we introduced Puddin to the house and the people who lived in it.  Peanut was seemingly just fine and just quietly followed Pudding around.  “Darcy”, Aunt Lee’s little Scottish Terrier, however, spent those first few minutes hiding behind the draperies.

As one could expect, they eventually calmed down as they figured out we were staying awhile.  Of course, we humans taking our seats around the dining table must’ve been a good hint.  It soon became apparent that Puddin was not going to pull her usual M.O. and lay under my chair.  She had curiosity in her paws and wouldn’t settle – she kept pacing in circles around us, under one side of the large table and out the other side, making a path around the kitchen and back again.  At one point, I got the idea to put my FitBit on her collar.  When we put it on her, it had 1,458 steps.  When we took it off 6 hours later to leave, it had over 16,000 steps!  All from pacing the room! 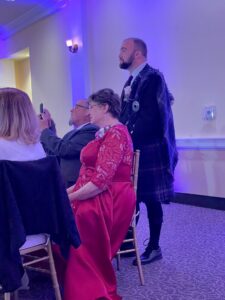 We spent the whole of the afternoon and early evening pouring over historical family documents Aunt Lee has been uncovering.  She made it her hobby several years ago to trace her ancestral heritage.  She has a large folded family tree map that details the Callander marriages back 12 generations.  A path following her (and Steve’s father Jeff) father back – keeping mostly to the male lines.  This excursion shows the family arriving in America via New York shortly after the Civil War, having just missed the American colony days and settlement wars, but just in time to represent America in both Civil Wars.

Alexander Callander arrived from Falkirk, Scotland where the family resided for many generations.  Before that – at least two counted generations – the last two on the map – from Edinburgh.  Just reading the handwritten family tree map, you could tell that there was the same drama associated with some of the marriages.

There were more then two unions of Callanders to ladies from England.  And two Callander brothers married a pair of sisters!

The most interesting Callander – Alexander Callander d. 1910 – as almost every generation of Callanders has several Alexanders and a few Marys – was an educated man who was very interested in the sciences.  In his obituary, it is noted that he was a well received contributor to the “Falkirk Herald”.  Spending most of his columns describing the Falkirk of his youth.  When Aunt Lee and Jeff explored Scotland on their homage trip a couple years back, they spent a full day in the Falkirk library pouring over old editions of the “Falkirk Herald” searching for some of those columns.  Since the Herald was not indexed, it was a painstaking process.  One that yielded no results.  Aunt Lee and I agree its certainly worth a future trip by itself to continue the research.

The maternal line – following the history of Marie Slintak – revealed deep roots in Hungary a/k/a Slavakia.  Today, the country neighbors Ukrane and its citizens are taking in war refugees.  It’s a proud thought to think our family overseas is doing their part to help those poor people.

It does make me wonder – how did a girl from Southeast Asia meet a boy from Scotland?  They obviously met in America.  The story must be an interesting one!  Fortunately, I get to read all about it, as Aunt Lee hired Ancestry.com to do all that research.  It’s all finalized in a 12 page report that I kept a copy of.

As of today, Aunt Lee is convinced there are no more of our Callanders in Scotland.  In America, there are only 4 left.  A blood line that may surely run out with Steve’s son, Zachary, who has no romantic promises for his future.

A hard truth that draws us back to the maternal line.  Could there be relations in Slovakia?